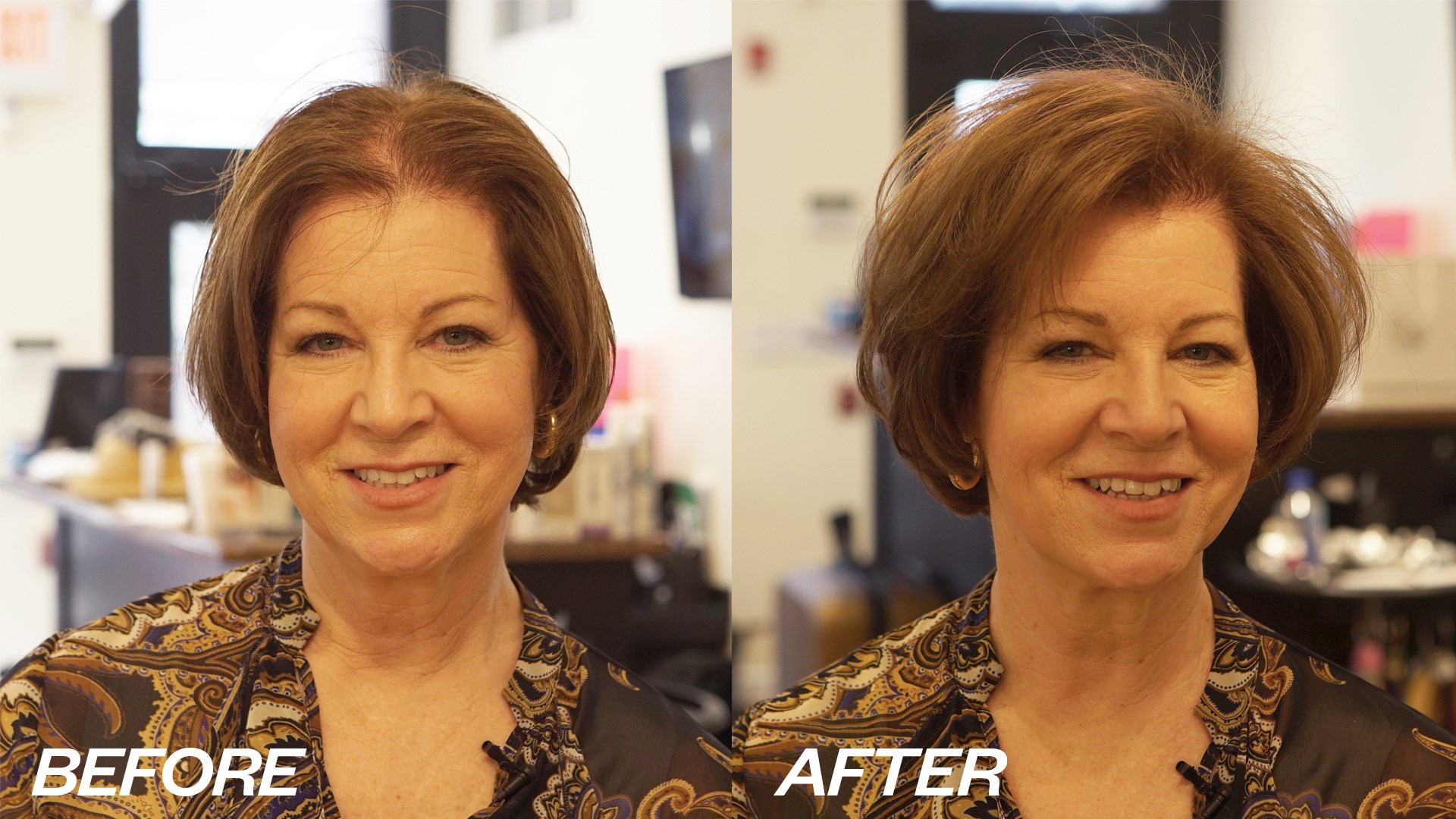 Nervous to cut thin, fine hair? Don’t be! Longer tresses weigh down hair near the scalp, so you lose fullness and volume at the root.

“Some women think by not cutting their hair it’ll make it look thicker, but the reality is you have to cut it because if you don’t it’ll look stringy,” Mele explained.

Heavy layers tent to thin the bottom out even more, so that adds to a thinner, more scraggly appearance overall.

“Finer hair typically looks best when the length is at the collarbone or shorter,” said Holly Pistas, artistic director, master makeup and hair designer at Gordon Salon in Chicago. “With anything longer than that, the ends can look transparent.”

Bobs, lobs or blunt cuts — even pixie cuts — are all great options for giving an appearance of thicker hair. “If your hair lays flat as a board, is prone to static and shows every scissor mark after a cut. I suggest opting for a blunt cut with microlayers,” said Fae Norris from Neighborhood Salon in Los Angeles. You definitely want to avoid “The Rachel,” she added. (Even Jennifer Aniston hated her most-famous haircut.)

“Don’t do it,” Mele warned. Female pattern hair loss typically begins at the crown; by creating bangs, you’re removing hair from where you need it most!

According to experts, you can still create softness around the face with strategic texturing that can give the illusion of bangs, but won’t compromise fullness and volume.

3. Be strategic with layers

Layers can make the hair look skimpy. The key word you should hear from your stylist is “texture,” not “layers.” Hairstylist Claude Baruk of Claude BARUK Salon in Las Vegas suggests starting with a simple cut and style, then adding long bangs followed by a texturized cut, which will provide a fuller look.

“Rather than layering hair, texturizing the ends will make hair look longer and fuller,” he said.

“Keeping layers near the crown of the head gives the hair more lift without interfering with the perimeter, giving the hair and the style more density,” Pistas added

Patty Mocarski, owner of Little Space Salon in New York City recommends that clients with thin hair keep the ends blunt to give a fuller, thicker appearance. “Don’t shy away from shaping and graduation around the face though,” she said.

“A short precision cut that is worn above the shoulder makes a bold statement while still remaining classic and elegant,” said Cassandra Carter from Oranj Studio in Portland, Oregon.

In short, you want to maintain as much bulk as possible. A longer angle can give the illusion of layers and movement without having to shatter the inside bulk of the haircut. If the hair texture is baby fine, stick with an overall bold shape like a bob and get creative with the face-grazing sections of hair.

5. A darker root gives the appearance of a denser scalp

An effective way to create the perception of thickness is to add color at the root. A slightly deeper root color will create the illusion of depth and can camouflage thinner hair.

“It’s similar to darkening eyebrows to make them appear thicker,” said Norris. While it won’t provide the appearance of volume necessarily, it does make hair look denser.

One caveat: The deeper root color, also known as a “shadow root,” can reflect less light and make some hairstyles appear smoother and flatter. Her suggestion is to take a test drive first with colored dry shampoo. “They provide volume and actually make the scalp appear a bit darker as well,” she said. Plus, it’s temporary so you can experiment before committing!

6. Play with your part

A deep side part will give volume and fullness around the face. Try adding wave and movement through the roots and midshafts of the hair with a curling iron or wand.